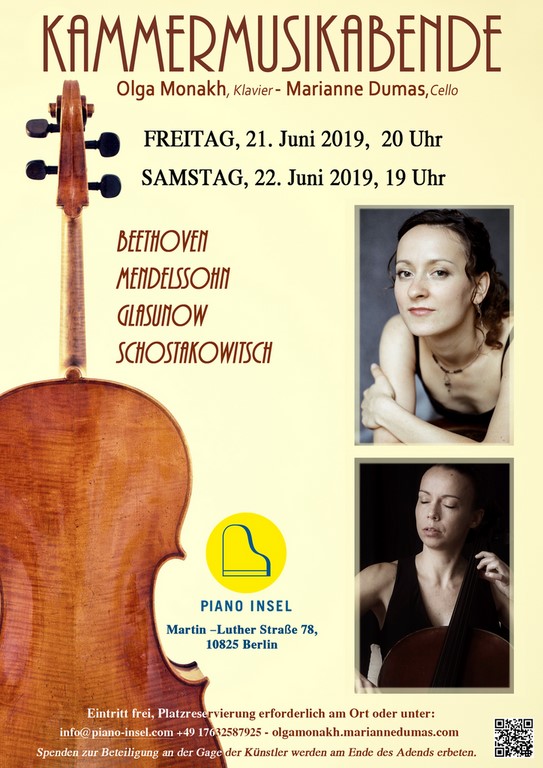 Limited sitting!  Do not forget to reserve your seat...
The entrance is free but  thank you for making a donation towards the artists after the performance. The equivalent of a concert ticket will be much appreciated.

Ukrainian born German pianist Olga Monakh won the National Piano Competition in Kharkiv and gave her first public recital at the age of ten. In 2000, she finished the Special Music School for Gifted Children in her native city, gaining a diploma with distinction and the Golden Medal. In 2001, Olga Monakh was accepted into the distinguished piano class of Prof. Klaus Hellwig at the University of Arts in Berlin, where she obtained an artistic diploma with distinction in 2006 and Piano-Soloist Master in 2011. She also improves her mastery with Dominique Merlet, Dimitri Bashkirov, Stanislav Ioudenitch, Elisso Virsaladze and Kristina Steinegger.

Olga Monakh received international recognition by winning several prizes in International Piano Competitions, such as the third prize and the bronze medal at the Vianna da Motta Competition in 2004. Her more recent success is the third prize at the “Concours Européen du Piano Vlado Perlemuter” in France in 2009, where additionally the audience unanimously bestowed on her the prize of the public.

Olga Monakh has been invited to distinguished halls worldwide: she has played at the Konzerthaus Berlin, Tonhalle Düsseldorf, Feierabendhaus Ludwigshaven and at the Teatro Sao Luiz in Lissabon. She performed on well-known festivals in Germany, such as the European Piano Festival Ruhr and the Weseler Piano Summer (Europäisches Klavier Festival Ruhr, Weseler Klaviersommer) and at other festivals in France, Switzerland, Italy and Japan.

As a passionate chamber musician, Olga has collaborated with various ensembles and has a large repertoire both in classical and modern music. She performed with Esther Hoppe, Nicolas Dautricourt, Raphaël Oleg, Gary Hoffman, Alexander Zemtsov, Wolfgang Boettcher and founded a piano duo together with the French pianist Nicolas Bringuier. They have extensively toured in France and Germany and were invited to a series of concerts and master-classes in French Polynesia. In March 2012 they made their debut at the Berlin Philharmonie and at the Vienna Musikverein with the Wiener Concert-Verein conducted by Yoel Gamzou.
The Duo originated in 2011 at the annual chamber music festival in Nice, France called "Les rencontres musicales du Negresco".

Together with the baritone Peter Schöne, she won the first prize in the prestigious Competition for Vocal Chamber Music of the 20th. And 21st century, carried out and sponsored by the Culture Circle of the Federal Society for German Business. As a result, the Duo performed the world premiere of „Eins und doppelt“ by Wolfgang Rihm, who had composed this cycle of songs especially for this Duo.
The Duo is currently recording complete Schubert Songs.

Olga is laureate of well-known foundations: the Villecroze Academy in France, the Paul Hindemith Society and the Ottilie Selbach Redslob Foundation in Berlin, the Oscar and Vera Ritter Foundation in Hamburg. Since 2008 Olga has played for the Yehudi Menuhin Society “Live Music Now”.

Olga was teaching at the University of the Arts in Berlin from 2013 to 2015 and founded then together with Nicolas Bringuier their piano school "PianoInsel" in Berlin. 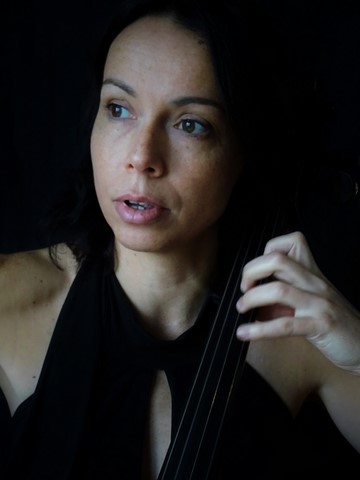 Marianne's aim as an artist is to combine knowledge and development of tradition. Eclectic cellist, her playing  style  is forged from rich musical experiences in France, USA, Latino America,  Spain, and Germany.


As a chamber musician, she had the pleasure of performing at the Severance Hall, the Kennedy Center, the Steinway hall of  New York, the Carnegie Music Hall of Pittsburgh. Her two favorites ensembles are duo with piano, and string quartet. In 2009 she created the Duo Aparté with pianist Adrien Reigner with whom she completed the chamber music course at the Royal Academy of London, with the highest mark, described as an outstanding duo. She recently played sonata concerts in Berlin with Olga Monakh and with Nicolas Bringuier, and a Debussy chamber music program at the Radial System in Berlin.

Teaching is as important as performance to Marianne, she is deeply attached to the transmission of knowledge. Through the years she has developped her own method The biomechanics of cello playing based on the French cello school and inspired by Alexander tecnics, Feldenkrais, Sophrology and Yoga.  In 2014 she created "The cello practice helper", a webpage where she shares her teaching tips and research with cellists around the world, teaches online and in Berlin.

Marianne loves the symphonic and opera repertoire, she is regularly invited as a guest in orchestras in France and Spain. Between 2011 and 2014  she was principal cello and continuo for the Fundación Excelentia at the National Auditorium of Madrid.  She also  likes to push back the boundaries of classical music by performing in  tango and flamenco groups, and recording regularly as a soloist for movie scoring.

Through constant exploration, going from one discovery to the next, her inexhaustible research took Marianne to Berlin in 2014 where she started a Bach Journey to delve deeply into the Cello Suites and the baroque cello. Beginning of 2016, she recorded the Bach Cello Suites in Berlin (with a full baroque set up) , wrote a publication about the baroque cello and made a new edition of the Suites based on reversing the bowing technique of the violoncello (similar to the viola da gamba bow-strokes with an overhand bow hold).

She had the pleasure of playing for Ton Koopman and received his "blessing" and positive feedbacks on her recording of the Bach cello Suites. Yo-Yo Ma also gave her his support after a meeting they had in Boston in 2016 where Marianne shared his research with him. The recording has been released in Spring 2018 by Urania Records.

About her studies: after finishing her studies in France (Bordeaux and Lyon), she moved to the USA where she graduated with a Masters Degree and a Performer Diploma from Carnegie Mellon University. Marianne was a student of Roland Pidoux, Yvan Chiffoleau, David Premo, Anne Williams, and also had the privilege of participating in masterclasses with Mstislav Rostropovitch, YoYo-Ma, Lynn Harrel, Georges Crumb, among other great musicians.

Marianne likes to share and create beautiful memories with the people she loves, she is an avid cook, loves art, nature, meditation, science, origami, running, and swing dancing.